It's Epiphany today! Back to the roots; did you know that this blog was called "Molecular epiphanies" at first? Not referring to the Christian feast day (Three Kings' day), which indeed is today, but to the word "epiphany", which means "a moment of sudden and great revelation or realization." I had to change the name because pronouncing it is too hard for me, haha. It gave me some awkward moments when people asked me what's the name of my blog and I was mumbling some gibberish.

Anyways. Would you like to hear about smoothie bowls? 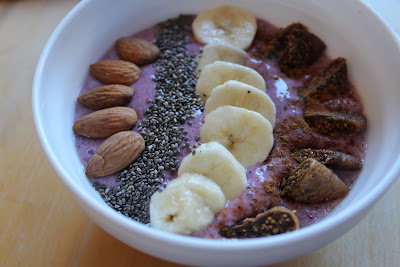 Talking about passion: I went to Bali, Indonesia, before coming here to France and there in Canggu, the hipster heaven, I fell in love with smoothie bowls (and my ridiculously good looking and cute surf teacher but somehow managed to keep myself from eating him alive, hahaha). Those bowls contained a piece of heaven, I tell you. Then, when I came back home, I was missing Bali so much that I started making those smoothie bowls myself.

Usually the "base" of my smoothie bowl contains

These I mix with a blender. On top of the bowl you can put pretty much anything. In the morning I usually like to add granola, just because I love it. And cinnamon powder <3 Here in the following picture I had added also some mini energy balls. Those are just made of died dates and figs, which I soaked first in a bit of water and then mixed with a blender and added some chia seeds and almond flour (and grated in a bit of frozen lemon, from which you get a lot of flavour when you can use also the surface of the lemon, organic option recommended) to make a paste firm enough to roll into little energy-rich and raw balls. Planning on making dem ballz as snacks for ski tours as well! Nams mums!! 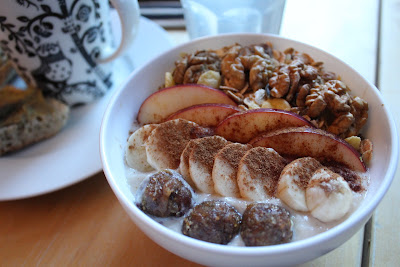 If sometimes you would like to avoid using soy products too much (because modesty in everything, sometimes vegetarian or vegan diet can contain a bit too much of it) and would like to give your bowel a nice and cleansing fibre treatment, I tried also making a smoothie bowl out of almond milk and ispaghula husk powder (aka psyllium) by mixing them together and adding in banana and fruits. These also made a nice base, a bit fluffier in a way. Although, I must admit that I somehow really like the taste of soy yogurt...

Anyhow, these smoothie bowls are a pretty nice and healthy alternative that I would recommend to try. Add some nuts or chia seeds on top to give more energy and protein, if you wish. Or treat your sweet tooth with some dried fruits when having your smoothie bowl as a snack. I'm at least completely hooked!

PS: back to the roots also in another way today - held a yoga class to some of my friends here in Chamonix. Oh I want to teach again!! I love it! Wish me luck on finding a space where to teach!!!
Posted by Mari at 11:41 PM